It’s officially fall, which means Michigan’s woods and fields are buzzing with stinging insects fueling up for winter; and some of them are grumpy.

Yellowjackets are especially not in the mood to be trifled with as they can be really intolerant this time of the year. As things begin to wind down in the fall, they can become aggressive.We receive numerous calls each fall season with homeowners claiming to have a nest somewhere on their property Homeowners will notice singleton bees and wasps hanging out around their doors, windows, and soffits; they searching for any crevice to squeeze into.  Yellowjackets often nest in the ground in colonies that can reach 4,000 to 5,000 workers. The entrance holes they are searching for might’ve been there since spring— but autumn is when the colony reaches its largest and when the insects become feisty. One reason is the last hatch consists of next year’s queens, which are the future of the colony.

Swat a stinging insect and you might trigger and even more threatening response: Like a honeybee, a dying yellowjacket releases a pheromone that alerts the nest. Meddling or even stepping in the wrong place can trigger a full-on attack with the wasps swarming and pursuing.

Humans are most likely to encounter stinging insects as they look for food. Their diet somewhat changes. Throughout the summer wasps are predators, feeding on other insects. In the fall they develop somewhat of a sweet tooth. Fermenting fruit, colas, ciders, fruit juice, become more attractive to the wasps. Because of this, they tend to linger about orchards, cider mills, picnic areas, outdoor restaurant seating, and barbecues— all popular fall hangouts for Michigan residents.

Similar to mosquito bites, wasp stings contain a protein that can cause itching. They can and will sting multiple times, along with hornets. Both wasp and hornet stings can be painful and swell for up to 24 hours as they inject venom into their victims.

Honeybees, on the other hand, have a barbed stinger and can only sting once, as they die after stinging. The stinger remains in the victim’s skin until someone removes it. You can easily scrape it out with a fingernail or with a credit card.

Overall, avoiding these insects in any season is the best method to prevent stings. Knowing the correct precautions to take not only keeps your fall season safe but above all, fun!

For more information on how to distinguish stinging insects from one another, be sure to check this out!

Here are some examples of nests to avoid: 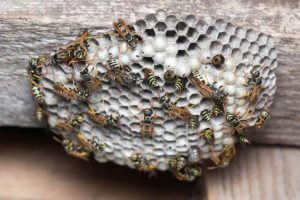 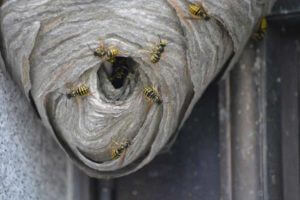 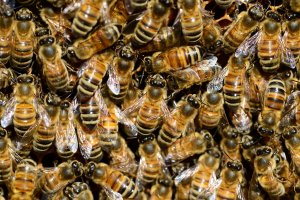 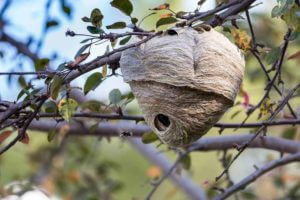