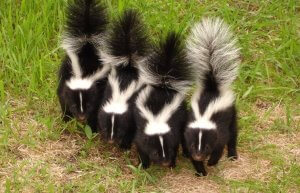 Everyone knows the age-old tale of Punxsutawney Phil, the legendary Pennsylvanian groundhog notorious for detecting the spring season each year. Who decided that a groundhog was the most well-equipped mammal for the job? Why not something a little more easily recognizable, like a skunk, for example. Let’s be realistic, skunks are much easier to spot than groundhogs. In addition, more people can most likely distinguish a photo of a skunk from a photo of a groundhog.  Apart from being easier to spot, skunks are an in-your-face indicator of spring. This is because skunks are among the first animals to emerge from their wintery slumber. Of course, it is not the sight of skunks alone that we recognize; rather their repugnant odor most commonly noticed along the sides of the road.

Yep, another sign of spring is not only seeing skunks out and about, but also as roadkill. There is a significant uptick of skunk roadkill in the spring, which decreases as the warmer months go on. This is due in part to their mating season, which starts in February. Apart from some winter denning, skunks lead solitary lives. That being said, upon emergence from hibernation, skunks are eager to socialize and will travel many miles to do so. Being mostly nocturnal creatures, skunks most commonly meet their fate on roadways at night; especially with young, eager skunks seeking to breed for their first time.

There was a time in which skunk trapping was a lucrative business. However, since the decrease of trapping (as well as skunk fur couture), an obvious rise in populations has occurred. This has been most commonly in urban areas where food sources and shelter is abundant. Skunks will nest anywhere they can get into, including burrowing below decks and other structures. This causes a multitude of problems for homeowners. Despite being pretty much terrified of human interaction, skunks will not be as quick to flee from your beloved household pet.

Skunks are virtually untouchable by most natural predators because of their ability to spray noxious liquid from their scent glands when they feel threatened or afraid. Coyotes and Great Horned Owls are about the only predators that find the potential for burning eyes and mouth to be worth it. However, your beloved pet does not have the same instinct, rather the opposite actually. Dogs in particular greet and distinguish one another by smelling the rear glands in other animals…including skunks.

That being said, a nose-to-butt interaction isn’t the only way your furry friend can get doused in the scent—skunks can shoot the liquid 10-12ft!  Even after multiple baths, you may still notice a faint whiff of it, most especially when your furry friend goes for a swim. This is because skunk scent can last up to 7 years on certain surfaces and becomes most noticeable when damp or wet. Consequently, the scent of skunk roadkill will become stronger after it rains. All in all, It is best for humans and animals alike to avoid coming in close contact with skunks at all costs.

Aside from causing an odiferous issue, skunks pose as a threat to lawns and gardens in search of food. They burrow and dig soft, grassy surfaces hoping to find their next meal, ideally grubs. The holes they dig are distinct, 3-4 inches in depth and close in proximity.  Gardeners especially see skunks as a nuisance because skunks are omnivorous and do not limit their diet to grubs alone; they also feed on grasses, grains, leaves, buds, garbage, as well as any berries or fruit within reach— all of which become abundant, you guessed it, in the spring. If you take anything away from this piece, it should be that spring equals skunks and vice-versa.

If you notice any signs of skunks around your home in the coming months, your best option is to call a licensed wildlife professional. At Hogarth’s Pest Control & Wildlife Removal we specialize in the removal and exclusion work necessary for skunk eradication. Give us a call and let us take care of your smelly neighbor today!