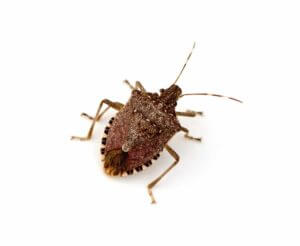 The Brown Marmorated Stink Bug (BMSB) originated in China, Japan, Taiwan, and the Koreas. It wasn’t until 1998 that they were first discovered in the United States. The BMSB is primarily an agricultural pest found in orchards but will invade structures in the fall to escape the cold.

BMSBs are not a major problem in Northern lower-Michigan but can be a nuisance in the southern parts of the state. They do not do any damage to the structure or bite, but they do stink—hence their name.

BMSB is aptly named by the odor they emit when they feel threatened. It is thought that this odor aids in protecting against predators. The bugs produce the smelly chemical in a gland on their abdomen. Some species can actually spray the several chemical inches. The smell has often been compared to potent herbs like cilantro.

Interestingly enough, the composition of the odor is comprised of chemicals commonly used as food additives and is actually present in cilantro. This smell can linger for hours so it is in your best interest to try to avoid the bugs or carefully sweep or vacuum them up if they have entered your house.

They will pack into a home by the thousands and can create a major nuisance and smell issue. The best method to Brown Marmorated Stink Bugs from entering a structure is a proper exclusion.

Hogarth’s is well-versed in varying types of exclusion for residential and commercial properties. We will seal entrance holes around pipes, windows, ridge vent and soffits. It is important to note that exclusion alone will not always fix the issue; the home will need to be treated to keep every Brown Marmorated Stink Bug away from the structure. Call us today!