The green bottle fly (Lucilia sericata) and bluebottle fly (Calliphora vomitoria)  are frequent visitors to decaying flesh, garbage, and feces. These blowflies are members of the family Calliphoridae, and like many of their relatives, both the green and bluebottle flies play vital roles in medical, forensic, and veterinary sciences. They are noisy fliers and move much quicker than their relative, the cluster fly.

In forensics, the blowfly larvae, otherwise known as maggots, help to determine the time of death, which aids law enforcement in investigations.

Medical treatment using a term dubbed “maggot therapy” can help to heal some otherwise incurable infections, but more on that later.

In veterinary medicine, feeding by larval green and bluebottle flies can cause substantial losses in animals and production.

You can find these blowflies throughout the world but is notorious in the United States and southern Canada. 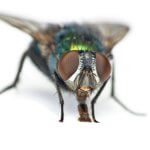 Adults flies are usually a metallic green but can also have a copper-green color. The mouthparts are typically yellow. Their backs are hairy, and their overall diameter is about 8–10mm. The plates at the base of their wings are hairless. 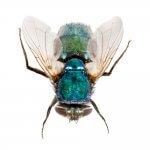 The bluebottle fly is bright metallic blue with black markings. Its body and legs are covered in black bristle-like hair. It has short, clubbed antennae and four tarsi per leg. Their eyes are red, and they have transparent wings, with black and pink antennae and legs. Their chests are bright purple and are spiked to protect themselves from other flies.

Blowfly eggs are usually white but can be a pale yellow. They often deposit them in large batches. The eggs are elongated with one slightly tapered end and are approximately 1.5mm long.

All stages, or instars, of the larvae, are smooth. The larvae are white to yellowish through all three instars of development and reach a maximum of 12–18mm before pupation. Identification of immature blowflies is demanding, requiring a microscope, and identifications are often confirmed by rearing these immatures to the adult stage. The pupae are in a hardened shell that is usually reddish-brown, light brown or black. This shell makes up the final larval instar skin. They are 9–10mm long with a width ranging from 3–4mm. Initially, the pupal case is white but darkens to reddish-brown in a matter of hours.

As mentioned above, green and bluebottle flies are significant in the field of forensic science. Scientists use maggots to estimate the minimum portion of the post-mortem interval, known as PMI, in a multitude of settings. According to scientists, green bottle flies are one of the first insects to arrive at a corpse. They are among the most critical species in providing accurate PMI estimations.

The most customary way of estimating PMI using the blowflies is to determine the developmental stage of the maggot upon collection. Although this method is usually accurate, it does have its variances, as many factors can determine the growth rate of a larva.

The green bottle fly is a commonly used species in human wound treatment for injuries that conventional treatments fail to heal. This practice has been dubbed maggot therapy, and its use is becoming increasingly popular. Under the guidance of a physician, they place the fly larvae on a wound. They then wrap the wound, and the larvae feed on the necrotic tissues and bacterium that occur in infected wounds. Surprising to most, their activity in a wound increases the promotion of healthy tissue growth. They achieve this by not only consuming the decomposing tissue but also secreting and producing special antimicrobial enzymes during their time in the wound. Most patients receiving maggot therapy treatment record no pain. Initially, contamination was a concern, but the use of sterile maggots eliminates any chance of harmful microorganisms.