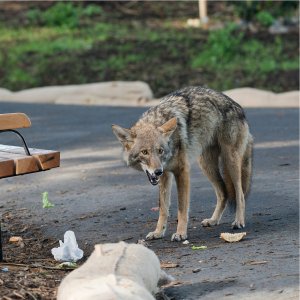 Predators are a group of animals that naturally prey on others. High on the food chain, predators stalk and kill their prey frequently in groups called packs. The coyote is a primary predator that we experience issues within Northern Michigan. Coyotes pose a threat to humans and other animals, including our household pets. Just as the control of the whitetail deer population is vital to our state, so is predator control. An abundance of predatory species means a decrease in all others. As a result, it is crucial to maintain a balance between predatory and non-predatory animals. We have all seen the videos on Facebook of people attempting to or succeeding in the domestication of these animals. Still, we absolutely do not advise making contact as they can carry disease.

Michigan hunters are known to say that the state’s growing wolf population is bad for white-tailed deer. Their lament is about the diminished whitetail population. It’s not uncommon to hear someone claim: “Wolf are eating all the deer.”

But what researchers have found recently is that coyotes were the number one predatory animal, followed closely by bobcats. Wolves actually came in fourth after a three-way tie among hunters, unknown predators, and undetermined causes.

Control of these animals is a service that we began to offer for those who are experiencing problems associated with these animals. If you have noticed a predator animal, namely a coyote hanging around your property, give us a call today. You do not want to risk the life of your beloved pet or livestock. We can help!