Centipedes and millipedes belong to a subphylum of arthropods called Myriapoda. In Greek, Myriapoda means “countless feet.” Spotting one of these lengthy, multi-legged bugs can be quite a surprise. Despite sharing some similar physical traits, they are quite different. 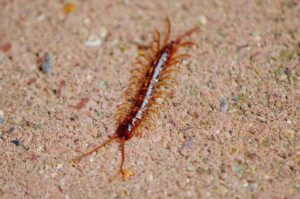 Centipedes are simple to identify by their elongated, worm-like bodies with their many pairs of legs. They can have anywhere from fifteen to hundreds of pairs of legs with one pair per segment, depending on the species. Interestingly, centipedes always have an odd number of pairs of legs.

In general, the body of a centipede is usually yellowish to dark brown, sometimes with darker stripes or markings. The heads of centipedes have a pair of long and sensitive antennae covered with dense hairs. They have small mouths and have large, claw-like structures that contain a venom gland. Some centipedes have compound eyes containing as many as 200 optical units, while others have a cluster of simple eyes on each side of the hear or no eyes. 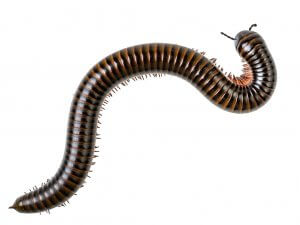 Millipedes are often called “thousand-leggers” because of their abundance of legs, but they can have anywhere from thirty to over ninety pairs of legs, depending on the species. The leggiest is Illacme plenipes, which can have more than 333 pairs of legs. Most millipedes are nocturnal and are primarily scavengers, feeding on decaying plants and occasionally dead insects. In the autumn, millipedes are known to migrate in great numbers.

Both species have segmented bodies. Both prefer to live outdoors in damp habitats as well. They find solace under logs, mulch, leaves, and rocks. Millipedes commonly invade living spaces surrounded by woodland areas. They reproduce in large numbers and migrate in dry weather. Notorious areas to find them are around foundations 2-3 inches in the ground, cement slabs, and basements. Neither will cause any damage to the structure, but they are a nuisance pest. Centipedes frighten many people and can bite if handled, but they are considered to be beneficial because they eat small insects and spiders.

While most centipedes are speedy, millipedes move more slowly and burrow into things. Their diets vary as well. Centipedes kill their live prey by injecting them with poison, whereas millipedes feed on decaying organic matter. Despite both having segmented bodies, centipedes only have one pair of legs on each body segment, while millipedes have two pairs per segment.

If you see an abundance of either in or around your home, they are likely breeding in your lawn, beneath mulch, or dead leaves and other debris around the foundation of your home. Prevention of these pests from entering your home is the best means of control.

Because of their freakish appearance, we do receive calls requesting the eradication of these pests. Give us a call today if finding one of these creepy-crawlies inside of your home has been a regular occurrence.