Consider yourself warned: this article is going to be nightmare fuel for arachnophobes. While it doesn’t contain frightening or grotesque spider photos, the topics discussed are enough to make you queasy if you’re not the fondest of the eight-legged creatures. There are so many creepy species of spiders and the things they do, and all that info is just a Google search away.

Of course, not all spiders are bad— not even most. They’re aesthetically unpleasing to many, yes; however, spiders are a crucial part of the ecosystem. They help naturally control pest populations, as well as weave beautifully artistic webs. Spiders actually become more fascinating as you study them. That doesn’t mean you should click on just anything tagged “spider” on the Internet, though.

Spiders living in ears may sound like an urban legend, and many of the pictures you’ll find of the ‘condition’ have been photoshopped. However, there are true recorded cases of spiders being found lodged in both humans’ and animals’ ears.

Spiders don’t typically seek out ears to crawl into— or noses or mouths for that matter. When it does happen, though, the accounts are genuinely disconcerting. Individuals describe the scratching sounds they hear as the spider tries to move, mention unexplained headaches and ear pain. Even though it’s doubtful to ever happen to you, it isn’t terrific to think about.

Do you know what’s more frightening than a huge ball of spiders? A huge ball of spiders that can fly. In an act called ballooning, some spiders create a parachute of webbing that they can use to catch the wind and travel to other places. Like all things, what goes up must come down, and before long, witnesses will experience spiders raining down from the sky.

In Australia, this can occasionally become a major issue. Witnesses have reported millions of spiders falling from the sky, covering full towns in arachnids.

This might be the worst spider infestation to date. The year was 2009, and the Baltimore Wastewater Treatment Plant sought help for what they deemed an “extreme” spider problem. When they said extreme, they weren’t kidding. Almost four entire acres of the property were completely coated in spider webs. Scientists who studied the event estimated over 107 million spiders were living there, with over 35 thousand spiders per cubic meter in some areas.

If you’re still debating whether or not you should give this a Google search, maybe this quote from the local paper will help your decision: “We were unprepared for the sheer scale of the spider population and the extraordinary masses of both three dimensional and sheet-like webbing that blanketed much of the facility’s cavernous interior… Far greater in magnitude than any previously recorded aggregation of orb-weavers, the spectacle’s visual impact was nothing less than astonishing. In places where the plant workers had swept aside the webbing to access equipment, the silk lay piled on the floor in rope-like clumps as thick as a fire hose.”

This story is an urban legend, no doubt, but it’s still one Google search to avoid when you’re alone late at night. The tale goes that, in the ’90s, a man was found dead in a Ukrainian elevator, with no immediately obvious cause of death. However, there did seem to be a bite mark, and an examination showed that he was missing a ton of blood.

Later, more victims were discovered, and authorities became concerned that there was some mutant creature or vampire. A police sergeant and detective decided to take matters into their own hands and search the elevator. They heard a strange sound from the top of the elevator and went to check it out. They discovered a giant spider with a head the size of a man’s fist. The detective managed to take out the spider – but not until it had claimed its final victim, the sergeant.

The Goliath Bird-Eating Tarantula is the world’s largest known spider. It can grow to roughly the size of a child’s arm and weigh as much as a puppy. Not all of them reached that immense size, but the largest one was recorded as 12″ long. Because they are so hairy, these spiders are often mistaken for small mammals. 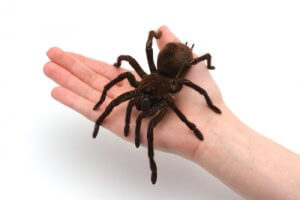 This tarantula’s body is covered in barbed hairs, makes a loud hissing noise if threatened, and has fangs that are a staggering two inches long, capable of piercing a mouse’s skull. Oh, it’s also venomous and can regenerate lost limbs.

Bites from the brown recluse are truly gnarly. Now, before you go suppressing your gag reflex, there’s something you should know: many of the terrifying bite images you will see when searching are misdiagnosed. Brown recluse bites are often blamed for diabetic ulcers, skin cancer, and complications from unrelated MRSA and Staph infections. Some are even bites from other animals. They can still really really mess you up, of course, but many people are quick to claim recluse when it’s actually something else.

All that aside, the images, whether misdiagnosed or real, are completely nauseating. And if you so choose (or not), you can look into what actually happens when you suffer a brown recluse bite. It’s not pretty.

Imagine you killed a spider – and then it came back from the dead. This isn’t exactly what happens with zombie spiders, but the very concept of how they work is downright eerie. Ichneumonid wasps lay their eggs on the backs of orb weaver spiders. The eggs then become larvae and burrow down into the spider until it is pretty much dead. But the larvae don’t stop there; they assume control, ordering the spider to stop spinning webs to catch prey instead of making a new bed for the larvae. The larvae then let the spider die, eat it, and wait to turn into wasps to restart the cycle.

Wolf spiders aren’t exactly as fuzzy as their namesakes. They got their name because they hunt down and catch their prey, rather than spinning a web and just waiting.

Wolf spider babies are far creepier than you could ever imagine. When a wolf spider lays her eggs, she attaches an egg sack to her stomach and carries it around until the babies are ready to hatch. She continues to carry her young around when they do, just like a human mother would – only more terrifying because she’s covered with swarming baby spiders.

While ingenious, trapdoor spiders are also jump-scare masters. These little critters create burrows under the ground, made of earth, plants, and their own silk. Once the burrow is built, it creates a lid, complete with a camouflage top, which blends right into its surroundings. Then, the spider crawls in, shuts the burrow, and waits. When it senses its prey through vibrations outside, it springs its trap by throwing open the door, reaching out, and grabbing the creature. Spiders of this sort catch frogs, baby birds, and even fish!

Some spiders don’t want to make themselves known to predators or prey, so they create a sort of diversion. These decoy spiders are, to put it mildly, pretty creepy. Some South American spiders will collect their prey and enemies’ corpses, and jungle refuse, to create a second spider on their web. Spiders in the Philippines do something similar.

HPC In The News