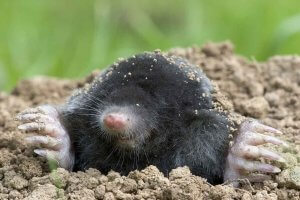 If you’ve ever caught sight of a mole, you know they’re really quite strange looking. Sure, they are small and furry— but that is more or less the extent of their cuteness. Moles have inconspicuous ears and eyes, meaning these features are not prominent; because of their subterranean lifestyle, they are practically blind, as they do not require their eyes to tunnel so they remain closed at all times. New research suggests that certain species of mole are evolving without eyes all togetherⁱ, according to a team of researchers led by J Martin Collinson from the University of Aberdeen. Their front legs were designed for digging, equipped with large webbed paws with 5 finger-like appendages; whereas their back legs are reduced and nowhere near as powerful, though webbed as well.

Moles cause major problems for anyone who appreciates the cosmetics of well-manicured lawn. They burrow underground tunnels just below the surface, feeding on various insects, earthworms, roots, seeds, fruits, and vegetables.  Under good conditions a Mole will produce tunnels at a rate of 15 feet per hour. When tunneling, moles dump excess soil upward which creates molehills that are made of loose dirt. This seriously destroys the cosmetic appeal of lawns and golf courses. There are various species of mole, all of which share some similarities.

There are two types of moles we commonly deal with in Michigan: the eastern and the star-nosed mole. Both species have several traits in common; for example, both moles can dig from 30-100 yards a day. The distance is dependent on temperature and soil quality. The eastern mole, the most common, has a very large range that can sometimes span multiple acres. They dig horizontally and have ravenous appetites, sometimes consuming 100% of their bodyweight daily!  Their diet mainly consists of grubs and earthworms, but they will also feed on ants, centipedes, snails, and slugs as well as grass seed, dog food and any human food left on the ground.

For those of you who have laid eyes on a star-nosed mole, you know they look eerily similar to the demogorgon from Stranger Things— the face only a mother could love. Unlike the eastern mole, the star-nosed mole tunnels vertically and creates the largest mounding problem for lawns. They burrow deeply until deciding to turn back around and burrow nearly to the surface, creating substantial mounds. These moles are semi-aquatic and many of their tunnels will exit in the shallow end of bodies of water. Star-nosed moles are usually treated by methods other than trapping, such as certain rodenticide treatments.

Mole problems can and will persist if proper eradication and prevention does not take place. Moles do not hibernate and remain active all year long. As the soil freezes deeper, moles stop making surface tunnels and tunnel further into the ground. Once they reach below the frostline, they remain there for the duration of winter feasting on insects and earthworms. It is important to know that there is no way to stop moles from getting in to the property, so preventative measures are fruitless. There are, however, a few means to mole eradication and control depending on the species and extremity of the situation. One of the most common ways is via trapping. It is important to trap as many mating pairs as possibly to significantly cut back on the population.

Due to the range of certain mole species, trapping is not always the best option. The most effective and cutting-edge way (also our preferred way) to solve a mole problem is by the use of a machine that produces carbon monoxide called the BurrowRX. These machines fill the soil with just the right amount of of CO so that all existing moles will be eradicated in 10-15 minutes. This method is by far the quickest, however it is important that all humans and animals remain indoors for the duration of the treatment as CO is harmful if inhaled. The BurrowRX assures users that secondary kills of non-target species are not likely when the machine is properly operated.

Moles are in my yard. What now?

It is important to continue taking preventative measures in order to keep moles from damaging your lawn. Unfortunately,  there is no permanent solution or way to physically block them from entering. In order to keep the moles from taking over once more, we suggest a monthly maintenance program to ensure no further damage.  At Hogarth’s Pest Control & Wildlife Removal, we specialize in the removal and control of moles and will work with you to create a program that works best for your situation. If you are suffering from mole damage, please do not hesitate to give us a call today!